My book, Queering Gothic Writing in the Romantic Age: the penetrating eye, explores how the first wave of Gothic writing, from Horace Walpole’s novel, The Castle of Otranto (1765) to the Gothic poetry of Byron and John Polidori’s story The Vampyre (1819) can be understood as queer. 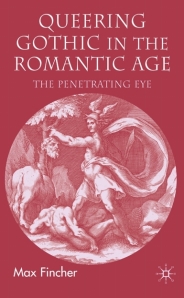 The thesis of the book is to shift readers’ attention away from a biographical/critical ‘gaze’ for the evidence for the (homo)sexual lives and tastes of the male Gothic writers Horace Walpole, William Beckford, Matthew Lewis, Lord Byron and John Polidori. Instead, I show how this critical narrative of suspicion, and the discourses of the ambivalently-gendered body and vigilance over same-sex desire in the Romantic period, make the Gothic a cultural space to both express and reject queerness.

The subtitle, ‘the penetrating eye’, is taken from how many Gothic villians are described. I also use it as a metaphor to describe this type of biographical criticism, as well as the culture of policing same-sex desire and bodies that existed throughout the eighteenth century. I suggest that one way of reading where ‘queer’ desire can be found in this period is in the act of looking between men/women. ‘Penetrating’ also suggests a sexualized connotation to the act of looking.

What is often queer about much Gothic fiction is the  anxiety and paranoia men feel about being watched or looked at (in sexual terms) by other men. To this end, I decided not to choose a traditional gothic image for the cover of the book, but a story from classical Greek and Roman myth. The cover image is an engraving of a Renaissance drawing by Polidoro da Caravaggio, and shows the androgynous figure of the Roman god Mercury chopping off the head of the Argus. The Argus was a monster with a hundred eyes who was employed by Juno, goddess of the heavens, to keep watch over the nymph Io, a sexual favourite of her husband Jupiter. The Argus is thus a metaphor for vigilance over illicit sexual relations. In a letter to his close friend and confidante, the Contessa D’Orisini-Rosenberg, William Beckford alludes to the myth of the Argus to describe how he feels his affectionate feelings towards William Courtenay are being watched:

‘Do you know of a state more frightening than this which I suffer? Spied upon by a thousand Arguses without hearts, constrained to abandon the unique hope that reconciles me to  life, menaced at each instant, accused of the ruin of a being I adore in whom all human affections are concentrated to a point.’